Please visit my new website and blog at www.rachelschmidt.ca. Thanks!

Some Kind of Reason

No matter who you are or where you live, at some point in your life, something bad has happened to you. Maybe not as bad as what happened to me (I hope), but something unfortunate has occurred, of that I’m certain. And I’m fairly confident that at some point during this bad event, someone told you that “everything happens for a reason.”

Now, depending on what was going on at the time, you either found that comforting or wildly annoying. Perhaps a bit of both.

For a cancer survivor, this one simple little phrase can be the source of endless angst and debate. If everything happens for a reason, then why did I get cancer? What am I supposed to learn from this? What did I do to make this happen? Why would God be so cruel to me? How can I make sure this never happens again? How can I make sure this doesn’t happen to my kids, or my husband, or my parents?

When I was first diagnosed with leukemia, I made myself crazy trying to figure out what caused it (never mind that the doctors told me it was impossible to know). Before cancer, I exercised, I ate right, I did yoga, I tried to avoid toxins as much as possible. So what went wrong? Was it because I drank from a hose as a child? Was it from eating disgusting raw animal products during a “Fear Factor” night at a pub when I was nineteen and stupid? (True story – I still shudder to think about it). Was it the aerial spraying against mosquitoes that happened in our area every year? Was it some undetected virus that I contracted while traveling in South America? Was it the insane levels of stress I was under due to graduate school and infants who didn’t sleep and a husband who was overseas? Was it something during my pregnancy that suppressed my immune system and allowed cancer cells to thrive? Or was it all of the above?

What was it? For months, I nearly made myself insane.

And then came the moment that I think all cancer patients arrive at eventually: I don’t know why this happened, but I’d better learn something so that it doesn’t happen again. As if we could prevent what was unpreventable the first time around.

Now that I’m out of the acute illness phase, I have come to recognize a few things.

When people say, “Well, it must have happened for a reason,” they are implying that there must be something essential to learn from the terrible event that we couldn't learn any other way, or some bigger plan that necessitated a life-threatening disease with permanent side effects. Does God give people cancer so we can learn life lessons? I honestly don’t think so. Did I learn some big life lessons? Of course. But that had more to do with how I chose to respond to the situation than the actual cause of the situation. More likely, I got cancer because we are systematically and unapologetically poisoning ourselves and our planet. That’s a reason all right, just not a good one.

When I was diagnosed, it was a shock to everyone I knew. I was the last person on earth who should have got cancer. Because of my extra-healthy lifestyle and no history of cancer in my family, many people I knew were scrambling to make this diagnosis make sense. There must be a reason. We are driven by a need to explain things, to make life make sense. But if you get cancer out of the blue, you know that life is not at all fair and doesn’t always make sense. A lot of people landed on stress as the cause. It was the one thing I wasn’t doing “right,” so it must have been the stress. Sure, maybe stress exacerbated the situation and caused an acidic environment that allowed cancer to thrive. Maybe. But did it cause my cancer? It’s doubtful. Otherwise every stressed person on earth would have cancer. And it essentially meant that, despite my healthy life, it was still my fault that I got cancer, which, as a side note, is not something you should generally say to someone who is dying. We feel terrible enough without being kicked in the teeth with “it’s your fault.”

Obviously cancer doesn’t give you carte blanche to be an idiot (or a jerk). If you’re doing that, stop it. What I mean is, if you get sick and decide to overhaul your life, if you decide that your Type-A, overachiever life just doesn’t jive with your exhausted post-cancer self, let it go. It doesn’t mean that you got cancer because God decided you needed to change your ways. It just means that you’re choosing to learn from a hellish experience, and life is too precious to waste being stressed to your eyeballs. My life has much more space in it now for things I love, like yoga and writing and friends, and especially for my family. Did I think I’d ever be a yoga teacher and a health and wellness consultant before cancer? Of course not. Do I think I got cancer so that I would change direction and become those things? Of course not. But I’ve wanted to be a writer since I was six, and I’m finally getting back to that. To me, that's no small thing. At times I miss debating world events with other smart and ambitious people. But in this new life, I don’t spend every Saturday buried in academic journals and debates on war. I’m a lot happier. Do I feel like I’m letting myself and others down by not finishing my PhD? I do. But that’s not a good enough reason. And I’ve stopped justifying my choices. I had cancer. End of story.

Do I believe that everything happens for a reason? I do. But I don’t always believe that the reason is some ethereal, spiritual, divine intervention. Maybe sometimes it is, but often it’s not. And I think by attributing unexplained cancers to cosmic reasons or individual faults, we are shirking responsibility for what really causes them: us. Not necessarily as individuals, but as a collective whole. We cannot keep polluting our water, air, food, and bodies (and babies) the way we are, and expect anything to change. Instead of finding and preventing the real reasons for many cancers, we are scrambling to repair people once they are already broken.

I got a hip flexor injury in August and wasn’t able to run (still can’t). Because of that, I started cycling and swimming and decided that a triathlon was an excellent idea (and then I panicked, but that's a different post). Did I get injured because the Forces That Be wanted me to see the light and switch to triathlons? No. I got injured because I was stupid and trained too hard, too fast, too soon. But instead of wallowing, I chose to do something great with a not-so-great situation. (See? Cancer is awesome for the life lessons.)

We can make ourselves crazy trying to find the reasons for bad things. Or we can just accept that our world is broken and poisoned and people are imperfect and bad things happen to good people all the time. I distinctly remember getting a chest x-ray during my hospital stay and resenting the x-ray technician for being healthy and alive and able to do her job. Why was she OK and I was the one with leukemia? No fair, I thought. And then she told me that her five-year-old son was in the children's hospital getting his third round of chemo. We all have our battles. Sometimes they are not immediately apparent, but they are always there.

I, for one, am going to stop asking why Bad Things happened to me. There's no good answer.

The better question is: What am I going to do about it now? 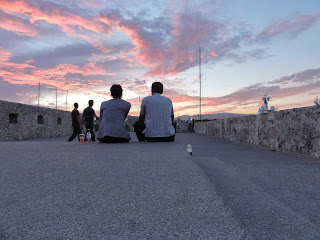 Posted by Rachel Schmidt at 9:08 AM

Where the Money Goes

Rachel Schmidt
Among other things, I am a wife, mother, sister, daughter, friend, writer, runner and now... cancer survivor.